April 6, 2015 My Spitzwegian life-under-the-eves in the Mainzer Altstadt continues. Here’s a tour of the inside of my new apartment, to satisfy all of you snoopy (I mean, curious!!) readers out there. 😉 I’m finally fully moved in, a process that took several weeks of back-and-forth and carrying suitcases up lots of stairs.

The entire apartment is exactly 14 square meters. That’s about the size of a large walk-in closet. But it’s incredibly efficient–there’s a bed/living room, a bathroom with a tub, two skylights and a dormer window, and a tiny kitchen. It’s rather like living in a Hobbit house, minus the cave part. Micro-living at its finest.

It’s super reflective of the German/European relationship with space, actually, which is entirely different than the American McMansion-and-four-door-sedan mindset. Here, less is more, and not just because there is so little space–I think people actually like it that way. One family I know, for instance, who own what would be considered in America a normal-size home for four people, actually turned the first two stories into apartments because it was too much space. That doesn’t happen all too often in the US. 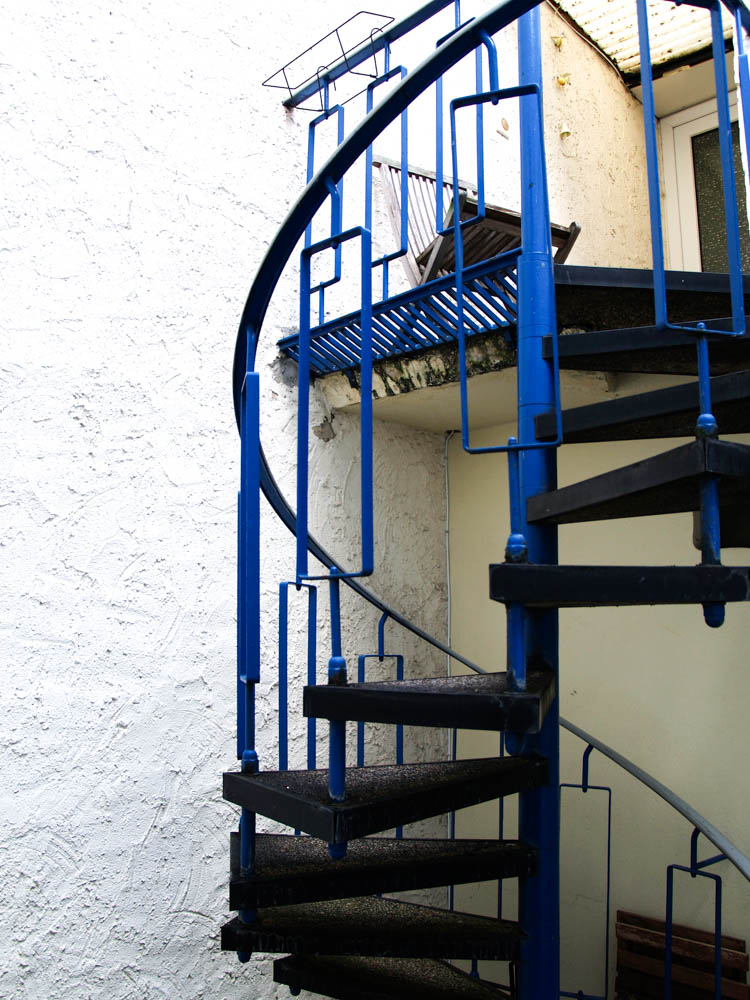 The spiral staircase (blue cast iron!) and balcony with room for exactly one person. And a cup of tea. It’s rather barren at the moment, but I am planning to install an entire forest of herbs as soon as it warms up enough. 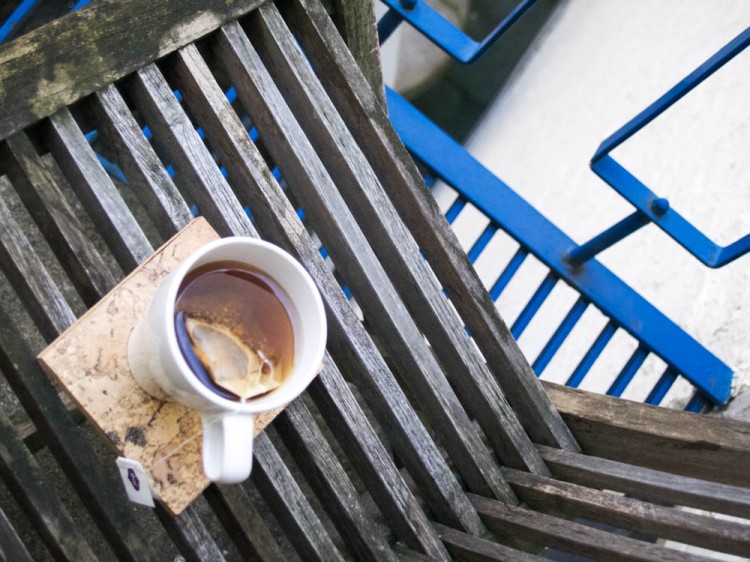 Many students in Mainz want to live in the Neustadt (New City)–it’s super hip, Mainz’s “little Berlin,” full of bars and clubs and funky places to eat. Apartment prices are lower, and the entire neighborhood caters to the student life. But there, you can’t sit on a balcony every and drink tea and listen to the bells in the Augustinerkirche.

Also, when I was putting together these pictures, it struck me how many absolutely fantastic people have contributed to the apartment in small or large ways, and, really, to my entire existence in Germany. Thanks, guys. Not to get too sappy, but I wouldn’t be here without you.

The beautiful Persian rug is on loan from a friend, as is the desk. The host father of another friend of mine helped me with the move, which included re-locating a wooden wardrobe from the 5th story of an apartment complex to a room at the top of a spiral staircase, and his wife is sewing me curtains. People are amazing.

A farewell present from Sissy from Finland, a fellow WWOOF-er on the farm in Kulmbach. 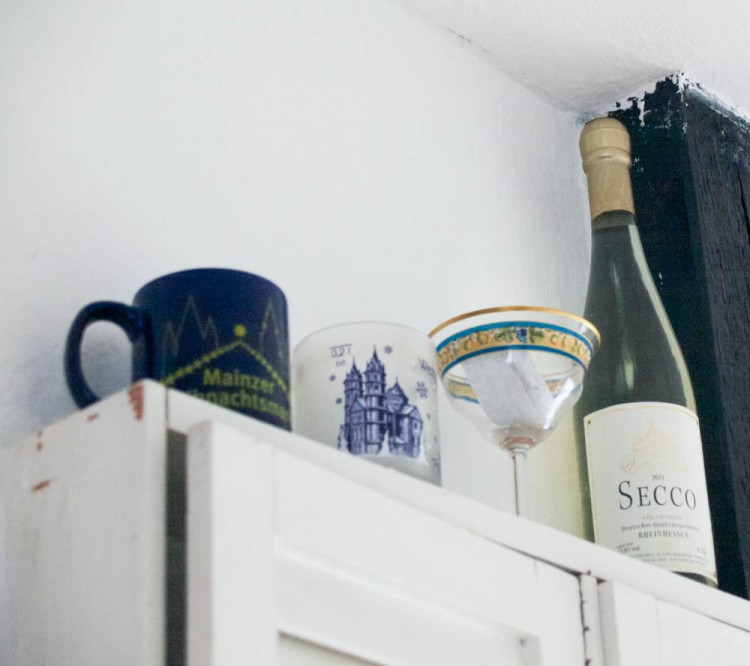 Mugs from the Christmas Markets in Germany, glass from a dear friend in Vermont, and champagne–a birthday gift–from my host family in Mainz.

“I think somebody up there likes me.” 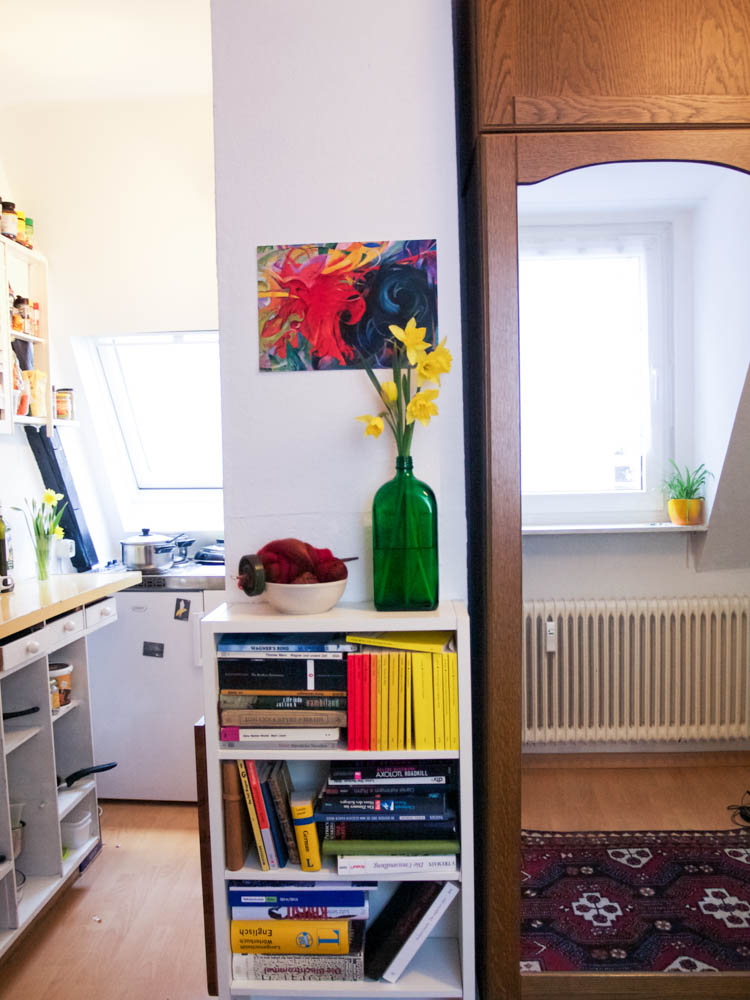 Lentil-Coconut milk curry on the stove. Drop spindle and wool from home, books (Reclam FTW!!), Kandinsky poster inspired by an afternoon with the German Expressionists in Munich, and daffodils bought from the local farmers’ market. In a Jägermeister bottle, of course. Also, you know you aren’t in the country anymore when you have to PAY MONEY for flowers, people. 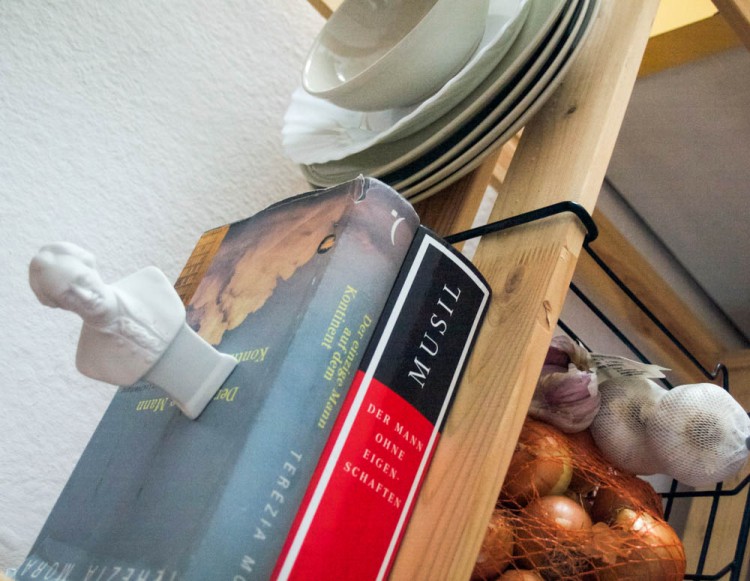 I bought a tiny bust of Goethe IN Goethe’s house in Weimar. It doesn’t get much more awesome than that, even though he looks super grumpy.

So, there it is. I’m super proud of it, actually, if you haven’t picked up on that already. My first apartment–another step on the road to adulthood. I got my first electricity bill yesterday and just about passed out. It was only for 20E, but, I mean, I got an electricity bill. There’s no going back from there.

Best of all, the trees outside my window have bloomed. 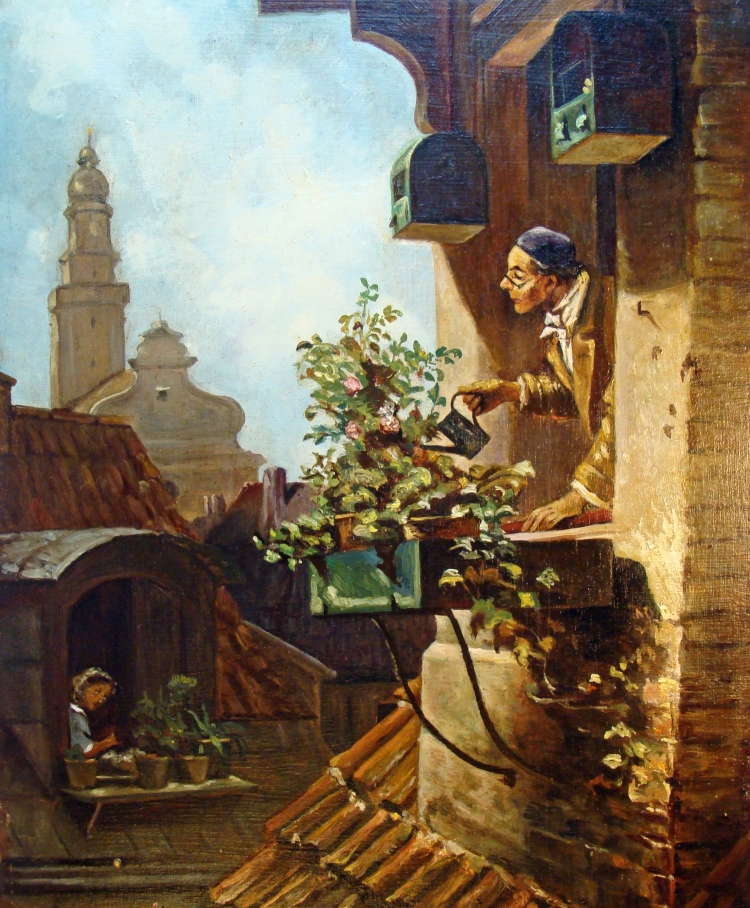 March 2, 2015 I’ve just moved into a Carl Spitzweg painting. His works belong to the Biedermeier period in Germany, those few decades between the Vienna Congress in 1815 and the start of the Revolution in 1848. It was a time of conservatism in German art, where painters and writers turned to the private and idyllic instead of the public and messily political. Spitzweg’s works are utterly charming, full of quaint people living quiet lives in a stable universe. Eine heile Welt, das sanfte Gesetz: the world is safe, the laws are gentle. The Bourgeoise is a sanctuary.

My tiny new apartment belongs to that world, I think. It’s in the middle of the Altstadt (Old City)–cobblestone streets, a spiral staircase and terrace, under the eves with sloping ceilings and a dormer looking out over slate roofs. There is a cloister behind me and a dozen candle-lit Weinstuben where you can sit at night and drink Riesling and talk to 80-year-old couples who have never lived anywhere other than Mainz. The bells are always ringing in some church or another.

For me, it’s another Gleichgewicht, just like Fastnacht was–the balance, the other half. The 20th-century literature with which I spend so much time is so damned complicated–the Welt is no longer heil, people do horrible and senseless things, and art may just be a joke, in the end. It can begin to wear on one. Being able to walk home over cobblestones, through air full of church bells–it is a chance to exhale, to regain, in some small way, one’s belief in the heile Welt. 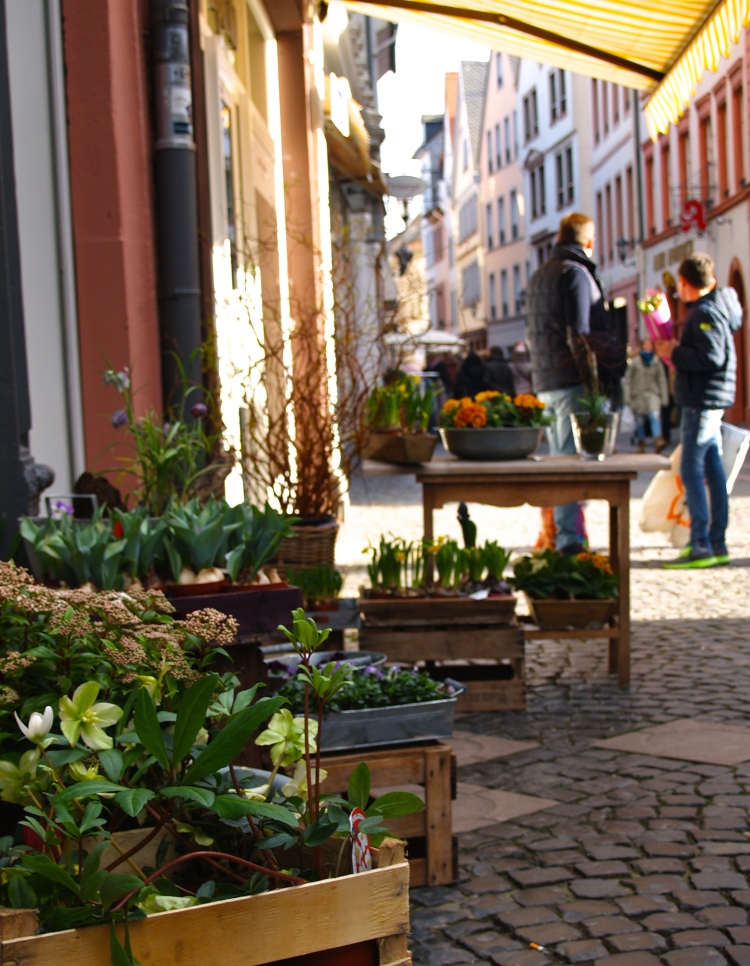 The building I am living in has its own name–Zum Braunenfels–and has foundations dating back to the mid 1500s. In the 17th and 18th centuries it served as a milliner’s shop. It was, along with most of the Mainzer Altstadt, almost entirely destroyed during WWII and then rebuilt in the original architectural style: Fachwerk, that exposed post-and-beam structure that is so quintessentially German.

And today, the ground floor is a flowershop. It doesn’t get much more romantic than that.

I will do another post on the apartment itself after I get everything in order. For now, though, here’s a tour of the neighborhood, which is pretty hard to beat. Certainly, it does cater to the tourist crowd–but from my balcony, which faces into the inner courtyard and not into the street, all I can hear are the bells and, occasionally, the street musicians. I can more than live with that.

…before turning in to this alleyway….

The inner courtyard is full of trees…

The building next to mine just happens to be the Augustinerkirche, one of the loveliest Baroque-Roccoco churches in Mainz.

Cobblestones, Vespas, and a shrine. 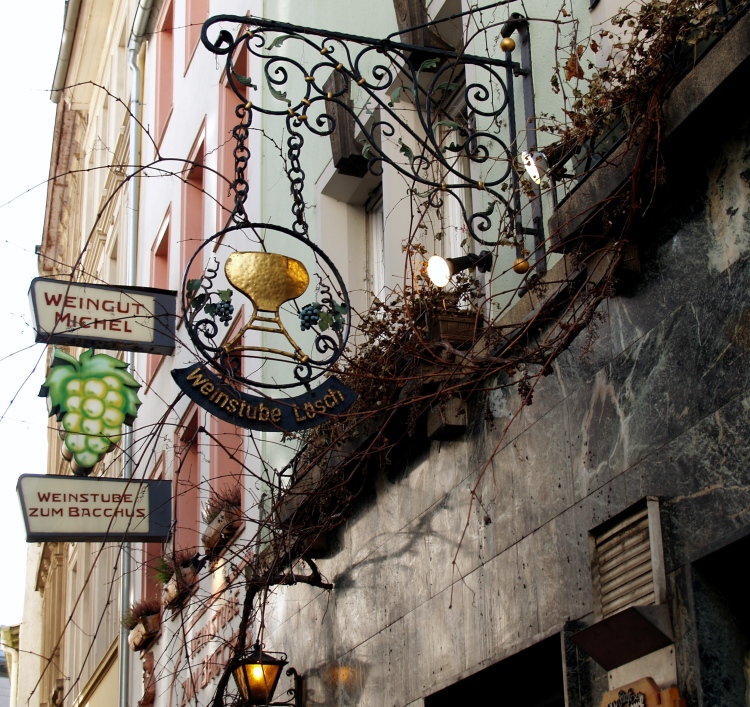 There are over a dozen Weinstuben within a three-minute walk of my apartment, often side-by-side. 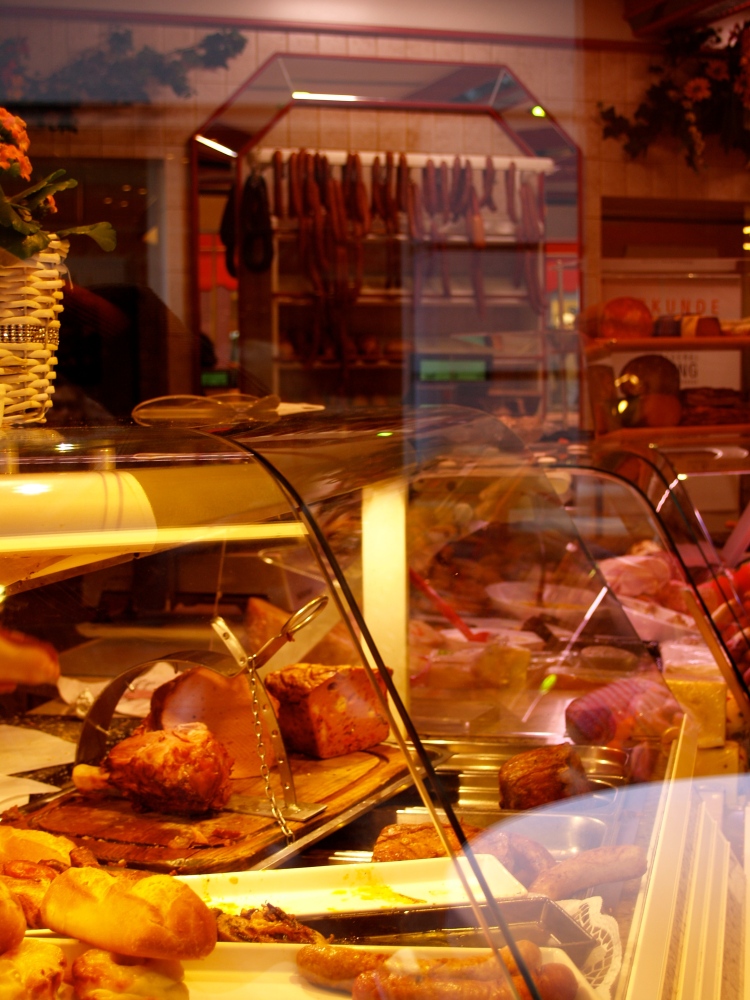 My second-favorite street musicians in Mainz. My top favorite are the three Turkish guys who are always playing at the train station–Turkey meets Klezmer meets jazz.