In light of keeping things neat, I am officially closing this blog until the next time I travel. Which will hopefully be soon!

And then suddenly it was our very last day in Germany.

The weather was perfect, for once, and I went first to the early mass in the Neumünster, then on a very long Wanderung all around the Wein Bergen, to end up one last time at the Festung Marienberg.

Leb’ Wohl, Deutschland! It was quite the month. I will be back…

And vielen herzlichen Dank, to all those who have followed and commented and generally cared! This trip would not have been near as much fun if I did not have all of you to share it with.

Yes, technically I am back in America….but I still have a few posts to write! I haven’t posted anything yet about Berlin, where we spent our second long weekend. It is a raw, crazy, thrilling city–lots of energy and little money, awake all day and all night. The happenings of the past century are still very present.

The downtown areas were a kaleidoscope mixture of old and new, shabby and posh together with construction sites everywhere. Here’s the funky artists’ street…

Mass housing on the East side, monochromatic and severe, left over from before the wall fell…

The West side up-scale quarter with classical architecture…. (yes, that is the square from Run, Lola, Run)

Even such stunning old buildings as the one above, however, have a blatant history. All the black is left over from a fire during WWII. The  holes from bullets are easy to see from a few steps closer.

The city is simultaneously moving on and remembering. Below is the holocaust memorial, where it poured rain.

Before and after shots of the Brandenburger Tor.

And perhaps most striking of all, the site of the bunker where Hitler spent his last days and then killed himself. In a city where the past is so carefully documented–here was no monument, no museum, no statue or fancy new display. Just a rather dirty parking lot.

Our group was able to take a private tour of the Reichstag building, the main seat of German government. Only the outside is original–everything inside is completely modern.

As a physical mirror of the post-Unification emphasis on transparency and openness, most of the governmental buildings are largely glass, inside and out. We could often see right through the conference halls out the other side.

Inside the Reichstag building, the room where the Parliament meets.

Angela Merkel’s house fits with the new regime. She rents a private apartment in the building below, no more fancy or pretentious than others on the street. In the Reichstaggebäude, her office was as simple as the rest, door unmarked saved for a name plate inscribed with “Dr. Merkel.”

And finally, one for my fellow German 400 students–remember those endless Tagesschau news programs? Here is where they are filmed!

Of course it would be unforgivable, to go to Berlin and not hear any music! Herr G. went to a concert every night, and was kind enough to let me trail along. We missed the Komische Oper (alas!), as the tickets were sold out. We consoled ourselves, however, and made do with two of the other 10,000 cultural events currently taking place in the city…

The first evening we went to a lovely Baroque concert in the Schloss Charlottenburg and then to dinner at midnight at the Ständige Vertretung, overlooking the river. And then the next night we heard an opera concert with two amazing young singers in the building below, and then went out to an Italian restaurant for desert. We were living it up, I tell you.

One can hardly imagine how surreal it is, to be walking around at midnight in Berlin, in a fancy dress and shawl, with three professors in evening wear arguing about wine in French, all while partially drunk on the best live singing one has heard all year. It defies reason. 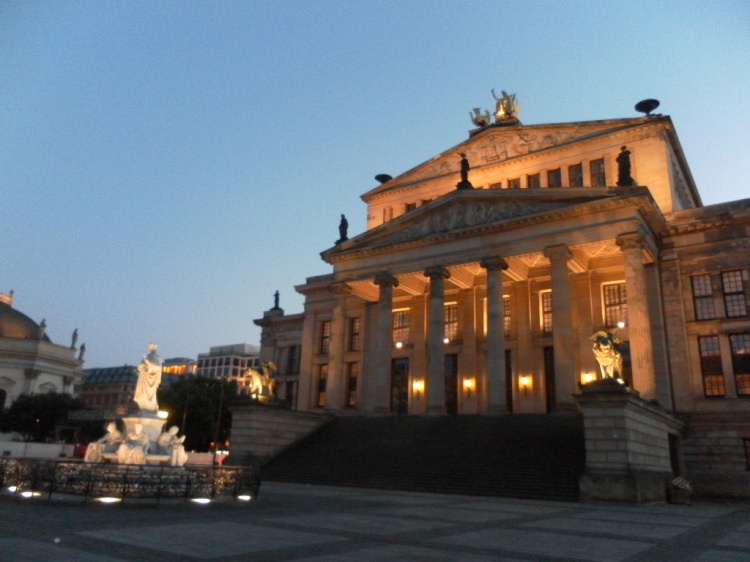 And I couldn’t resist the gigantic poster of a morose Barenboim outside the Berlin Philharmonic.

And the museums! A definite highlight for me was the Pergamon, which utterly satisfied the geeky Classics side of things. The museum had full-size recreations of various ancient buildings–awe-inspiring, to say the least.

A gate from Babylon, below. As with the churches, I find such things puzzling and astounding. What drove those creators, in this instance thousands of years ago, to devote a life time to make something so beautiful?

The last place I visited was another modern art museum, this one an old restored railway station….

The main exhibition was the work of Joseph Beuys, a new one for me. He was one of the most important German artists of the previous century. I would have to spend a good deal more time with his work to make any commentary on it, other than to say that I found it exceedingly enigmatic. But I really liked the work below, dozens of blackboards filled with faint writings (in English!) on philosophy and society and geometry.

I was mostly interested in Anselm Kiefer, the second artist I had fallen for in the San Francisco MOMA. There was only one small room of his works here, and he was as difficult and as beautiful and as tied to Germany’s history as before. If Cy Twombly is Shakespeare (“What do you read, my lord? Words, words, words…”), Kiefer is Mann’s Doktor Faustus.

If you are ever in San Francisco and the exhibition is still there, go and see this one below, with the lead angel wing.

In those days Germany, a hectic flush on its cheeks, was reeling at the height of its savage triumphs, about to win the world on the strength of the one pact that it intended to keep and had signed with its blood. Today, in the embrace of demons, a hand over one eye, the other staring into the horror, it plummets from despair to despair….When, out of this final hopelessness, will a miracle that goes beyond faith bear the light of hope? A lonely man folds his hands and says, “May God have mercy on your poor soul, my friend, my fatherland.”